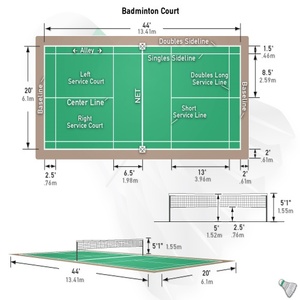 The dimensions of a badminton court are mandated by theBadminton World Federation (BWF) and are universally accepted. Thesemeasurements have remained unchanged since they were established in 1934.

Badminton is typically played on hardwood floors orsynthetic rubber mats made specifically for badminton. The court measures 44feet long and 20 feet wide and is divided by a net into two identical halves.The standard court contains lines for both singles and doubles play. Doublesplay is designated by the outside lines, while singles uses the baseline andinner sideline. The doubles court is the same length as the singles court, butthe outer sideline makes it 18 inches wider.

All lines are standardized to be 1.57 inches in width.This measurement is essential because the lines are considered part of thecourt. If the shuttlecock touches any part of the line when it lands, the shotis considered to be in bounds.

Baseline: This is the back line on both endsthat runs parallel to the net and measures 20 feet, the width of the court.

Center line: This runs perpendicular to the net anddown the middle of each side, measuring 13 feet. The center line separates thetwo service boxes.

Doubles sideline: This line, along with the baseline,forms the outer boundary lines for the court. It runs 44 feet perpendicular tothe net.

Singles sideline: This runs along the inside of thedoubles sideline and parallel to it. The line measures 44 feet and designatesthe singles court along with the baseline.

Short service line: This line covers the width of thecourt and is the closest line that runs parallel to the net.

Doubles long service line: This designates the back service linefor doubles and spans the width of the court.

Alley: This is the area between the singlesand doubles sideline that is 44 feet long and 1.5 feet wide. This area isconsidered outside of the boundaries for singles games.

Net: The net is fastened to two polessitting on both doubles sidelines. The net should be 2.5 feet tall and 20 feetwide. The height of the net should be 5 feet and 1 inch at the poles and 5 feetat the center of the net.

Ceiling Height: There is no mention in the badmintonrulebook about a minimum ceiling height required for a badminton court, butgyms will typically allow at least 30 feet of clearance. Usually, a shuttlecockcoming in contact with the ceiling is out of bounds, but the rules will varyfrom gym to gym.

Although the measurements of a badminton court arestandardized, the colors of the lines and the surrounding environment are not.This may not seem significant, but playing with an object as small as ashuttlecock traveling close to 200 miles per hour can be difficult on the eyes.There is no real solution when dealing with poor color schemes, but you shouldat least expect to face them from time to time.