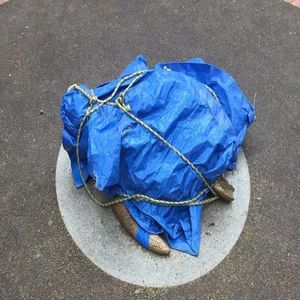 Let's look at a picture first. What is this?

This is a turtle sculpture at a playground in Boston, USA. Recently, it was complained by the public that it would burn the child, so it was wrapped up.

"The finger of my 5-year-old son was burned this morning."

"The temperature of the metal turtle on the playground today is 56 degrees Celsius, too hot!"...

Since June, the city government has received at least three complaints and recommended that turtles be removed from the playground.

The picture below shows that at the beginning of this year, designer Nancy Shaun sat on her turtle sculpture. She should have thought that there would be such a result.

The temperature is only 20 degrees, the child's butt is actually burned off a piece of skin.

In May of this year, in a residential area in Xi'an, 57-year-old Ms. Yi, with her 1 year and 3 months old grandson playing in the children's playground downstairs, just put the child on the slide and the butt was burnt. The child was then taken to the hospital by his parents and was diagnosed as a secondary burn. The slides in the community are made of metal and there are no hints.

After the accident, a cordon was pulled around the playground, indicating that the equipment is faulty. Do not use it.

In June last year, a 2-year-old child in Guiyang was also burnt to the butt by a metal slide, causing a shallow 2 degree burn. The temperature of the day is close to 30 degrees.

The burn plastic surgeon of Guiyang Burn Hospital said that children should take care to go out in high temperature, don't let them walk barefoot on the ground, and don't let them casually touch metal objects to avoid being burnt.

The doctor also said that in addition to the slide, due to exposure and light, the temperature of the ground lamp in summer is also quite high. Once the child accidentally falls down and presses the small hand on the ground lamp surface, it is also very easy to be burned, so avoid it. Keep your child away from the group lamp.

Under the sun, we all know that metals will heat up very quickly, but many people may not realize that the plastic and rubber materials in the playground will also burn children's skin.

One day in June, around 3 pm, someone did an experiment and wondered how hot the pleasure facilities were. The thermometer shows that the hottest facility is a plastic slide. In direct sunlight, its temperature is as high as 62 degrees Celsius!

Below is the test data on a playground in Idaho, USA, at 30 degrees Celsius:

"The ground itself is very hot, and the rubber mats on it are hotter. I really want to invent a kind of play equipment that won't burn children, or at least have a cover so that their temperature is not so high," one citizen said.

Children's skin is more delicate, more fragile, and more prone to burns, so parents should be extra careful. Experts suggest that before the child plays, the parents test the temperature of the facility with the back of the hand, because the back of the hand is more sensitive to heat.

Jennifer Vanos, an assistant professor at the Arizona State University School of Sustainability, says it's hard to know how widespread burns happen on playgrounds, because not all accidents are reported.

Covered rides can prevent the surface from getting too hot. In addition, "the location and direction of the playground and facilities are also important. For example, the slide is best towards the north."

"The playground or play area is placed on the north side of the school, so it is mostly cool for most of the day." However, she believes that it takes a long way for the city to plan like this.

Phoenix in the United States is a hot city, where the average summer temperature is above 38 degrees Celsius. A study by Jennifer Vanos found that the temperature of the rubber floor of a local playground was as high as 80 degrees Celsius, which was enough to burn the skin within three seconds.

Children often take off their shoes when they play, which is more likely to cause burns. In addition, rubber also emits a lot of heat, which has a greater impact on children because they are short and closer to the ground.

Jennifer Vanos warned parents, “Be sure to be aware, make sure your child knows that the playground facilities will get very hot.”

What should I do if I get burnt?

Once a child is burned, don't be blindly rescued. You must remember five words: rush, take off, soak, cover, and send. Rushing - immediately remove the heat source, rinse the wound surface with running cold water; take off - rinse, carefully remove the clothing, and keep the sticking part; soak - for the obvious pain, can be soaked in cold water for 10-30 minutes Cover - Cover the wound with clean or sterile gauze or cotton cloth and fix it; send it to a doctor for medical attention.