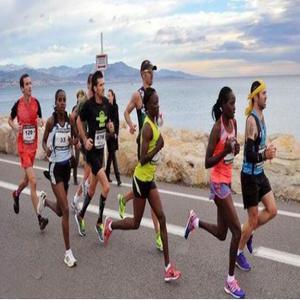 Which is better for running? On tarmac road or athletic rubber track?

Nowadays, more and more people exercise and run, as well as the rise of the “marathon fever”, the venue for running is getting more and more fastidious. However, in urban life, one can practice long-distance running only by choosing a road or a playground. . In fact, whether it is running on the road or running on a rubber track, both have their own advantages and disadvantages.

The following are the advantages and disadvantages of roads and rubber running track:

The city roads mainly include asphalt roads and concrete roads. For cars driving on the road, the support strength and friction given by the ground are the most important. But for running, runners are more concerned with the hardness, elasticity, flatness, etc. of the ground.

The cement road surface is too hard. The technical requirements for the runners are higher. The runners who need to swiftly land on the floor and have light movements. But if the runners, who have heavy weights or have heavy jogging and running, run on the hard cement road for a long time and will be vulnerable to injury.

(1) The common road surface on a park or sidewalk can avoid traffic signals if it runs around a fixed point.

(2) The road surface is relatively flat, with few roll or pits.

(1) Too hard to run for a long time is likely to accumulate pressure and cause injury.

(2) Sometimes people who need to dodge pedestrians, do not run smoothly.

(1) It is the same as the road race venue and can simulate the real road feeling of the match.

(2) The friction and hardness of the road surface are high, and it is not difficult to run.

(3) Landscapes or streets change from time to time, not monotonous.

(4) Convenient, everybody has a street at the door, and just put on shoes to start running.

(1) The road surface is relatively hard, and it is easy to accumulate pressure and fatigue when the running volume is too large or the running posture is poor.

(2) Due to drainage requirements, most roads have a certain slope, which may affect the running posture.

(3) Need to pay attention to the traffic.

Although the number of rubber track venues has increased, it is not all high-standard venues. Some rubber track can only be covered with a layer of rubber, uneven thickness, and even under the rubber potholes, joints exposed. Running on such a venue often occurs when you step on empty feet. There are also many rubber fields that fall into disrepair for maintenance.

So, what is the high-standard rubber running track?

(1) Neither too hard, nor too soft, no burden on the body.

(3) Distance measured, convenient to calculate the mileage and pace.

(1) Most people are accustomed to detouring counterclockwise. If there is no alternate direction, long-term down may cause uneven left and right leg muscles.

(2) There is a difference in the sense of running and feedback from asphalt roads in the running race. Only training on the rubber track may affect actual performance.

(3) Continuously running around the circle can cause stress and fatigue on the knees, hips, and ankles.

(4) If running a long distance such as a marathon, the rubber track looks too soft and has a sense of force.