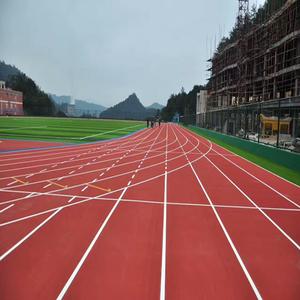 Foreign netizens ask: Why the rubber track is red, not blue?

The night before, Facebook netizen Timothy Tokarsky sent a few photos of the stadium, which is located in Pennsylvania, USA.

He said, "The track surface is done! All that's left to do is paint the lines."

Some netizens left a message: "Wh is it red?? Where is the Rambler blue?"

1. Red gives people a visually strong stimulus that stimulates the nerves and muscles of the body to stimulate and impulsively, helping the player to enter the game as quickly as possible. And the red has tension and looks generous, which is why the open-air stadium mostly uses the red track.

2. Red is a color that is stable relative to other colors. The plastic track is leaking in the sun for a long time, and the red rubber track is not easy to fade.

3. The turf in other spaces is green, so the red and green look looks better.

According to the IAAF's plastic track test standards, there is no hard and fast rule on the color of the runway surface. In the standard, only the runway color should be evaluated using the “Matthew Color Handbook”. The color of the synthetic material (runner surface layer) must be uniform and consistent with a specific color in the manual; the color of the track line should be clear; It does not change with the weather, and the color and material of each area of the runway are the same.

At present, there are fewer blue runways in outdoor venues in the world, and they are also "new" things. More famous are the blue plastic track of the Berlin Olympic Stadium and the track and field venues of the Rio Olympics.

At the 2009 World Championships in Berlin, the blue runway entered the public's field for the first time. On this runway, Bolt broke two world records of 100 meters and 200 meters. The venue of the World Championships - the Berlin Olympic Stadium uses the runway of the Swiss Conica (CONICA), the special coating was developed by BASF.

The Rio Olympic Games, which ended not long ago, also has a beautiful blue runway, designed for the Rio hot and humid environment, containing the latest technological achievements, designed and laid by the Italian company.

This blue runway has created a miracle this summer! Ethiopian Ayana won the women's 10,000-meter gold medal with a score of 29 minutes and 17 seconds 45, breaking the 1993 world record of Chinese player Wang Junxia 29 minutes and 31 seconds 78. This record has been dusty for 23 years.

For such a "presence of God," the competitors questioned her running too easily - "I don't believe she has made 100% strength, it is too easy for her. I can't see any mood on her face." Others are struggling behind her. I can't say she is not clean, but there is some suspicion."

Continue to talk about the track. So, when did China’s first blue track appear?

Beihang, the blue track is harmonious with the green lawn.

At the end of 2015, the best plastic track in Tsinghua University was born, laid by the German company Politan. It is also blue.

There are still many blue plastic trackes in China, such as the Hubei Academy of Fine Arts and the playground of Lianyungang High School.

What are the advantages of the popular blue track?

According to the research conclusions of color psychology, red symbolizes enthusiasm, authority, and selfconfidence. It is an energetic color, but it also has a warning meaning, which is easy to cause psychological stress. Blue symbolizes hope, ideal, independence, spirituality and intellectuality. Almost no one will be disgusted with the blue color. The direct psychological effect of color, the direct effect of physical light stimulation from color on human physiology.

Bremer, a German psychologist who specializes in the relationship between sports performance and color, believes that blue has a "running effect" on athletes' minds - blue is reminiscent of the boundless sea and sky, attractive, people are more willing Run on the blue track.

At the 2009 World Championships in Berlin, the contestants said:

Ethiopian longdistance running star Becker said: "Running on the blue track feels very comfortable, allowing people to calm down during the game and focus on the game."

Bolt praised after the 100-meter war: "The track has a feeling of flying."